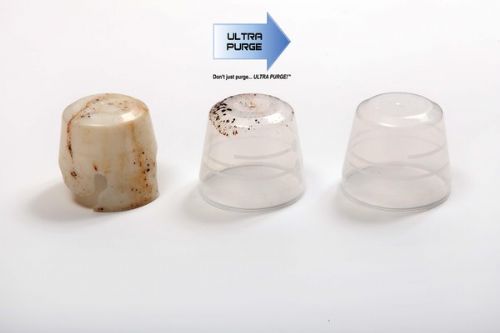 Chem-Trend's Ultra PurgeTM PO extracts the material residues that can build-up in hot runner systems and cause hang up spots in injection moulded parts weeks after a colour change.

Chem-Trend has invested extensively in R&D to develop grades of Ultra PurgeTM that are compatible with a wide range of hot runner technologies supplied by the world's leading hot runner systems manufacturers.

Graziano Pestarino said, "The trials with Ultra PurgeTM PO showed chunks of carbon being pulled out from the hot runners. As for the colour change, Ultra PurgeTM PO was not only pulling out the red colour from the previous production run, but also traces from earlier used colours.

Though, the performed cleaning of screw and barrel by the previous used purge compound was adequate, it was failing to purge the hot runner systems. That lingering contamination is what led to excessive downtime and scrappage."

Ultra PurgeTM PO has also shown to be more economical to use, as the bucket manufacturer previously has been using double the purge compound needed compared to the Ultra PurgeTM PO compound.

Since its founding in 1960, Chem-Trend has evolved into a global organization that delivers value-added solutions to customers across industries and market segments around the world. Now, as part of Freudenberg, a global technology group, the company's philosophy and values integrate with the group's overall Guiding Principles of providing value for customers, innovation, leadership, encouraging the well-being and development of its people, corporate and personal responsibility, and a long-term orientation with a focus on sustainable business practices and solutions.

Chem-Trend works to improve not only its own impact on the environment but to leverage its expertise and product technology to helps its customers reduce their impact as well by improving their production efficiency, reducing their waste and minimizing their use of harmful chemicals.

Chem-Trend offers a globally integrated network of experienced, knowledgeable and insightful production and technical experts in all major manufacturing regions around the world, serving customers through offices in North America, South America, Asia and Europeis a global leader in the development, production and supply of specialized mould release agents. With more than 50 years of experience making high performance release agents, die lubricants, tire paints, purge compounds and ancillary products related to moulding, casting and forming operations, their expertise goes well beyond just the products that they develop and manufacture. It reaches into the production processes of the industries that they serve.