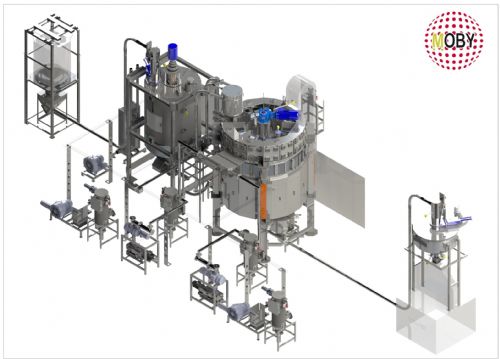 With our customers, one of the most frequent technical comparison points regards the best way to do the polycondensation of recycled PET: better on the granules after the "pelletization" or better to do directly on the regrinds?

The answer to this question is not univocal, but obviously depends on the type of technologies used and, in particular, on the type of polycondensation plant.

This article summarizes several conversations with technicians and operators in the market and has the purpose of demonstrating that, when the polycondensation is carried out directly on the PET regrinds, it results better, compared to the polycondensation on the granules, in various aspects: energy consumption, investment in plants, operation and maintenance.

A polycondensation plant for recycled PET that works on the granule requires that a "pelletization" phase, i.e. transformation of the regrinds into granules, is carried out in advance.

The simplest pelletizing and polycondensation plant for recycled PET (F1 - MODEL A) is composed as follows:

Since this configuration is too dependent on the quality (variable) of the input material (humidity and intrinsic viscosity) and can generate instability in the characteristics of the granules, it's preferable to adopt a more sophisticated version (F2 - MODEL AA) which also provides:

Such a system has at least three advantages compared to the basic version, as it allows:

For many operators on the market, the method described above is still the best way to bring recycled PET back to characteristics that are equal - if not superior - to those of virgin material in terms of intrinsic viscosity (IV) and therefore mechanical properties.

However, if we take a closer look at this system configuration (F3 - MODEL AA), we realize that it's not really energy efficient - and not only.

In the process described, in fact, the material undergoes a sequence of two heating and two cooling as follows:

The question is therefore the following: is it possible to build a system with a single progressive heating curve and a single cooling at the end of the process?

The answer is "Yes".

If we move the polycondensation reaction before extrusion (F4 - MODEL MOBY), the material is progressively heated until melting and subsequent pelletizing.

And also cooling occurs only once.

In detail, the material passes through the following thermal steps:

All the benefits related to the stability of the final product are maintained, but energy consumption is reduced, because the heat introduced in the previous phase of the process is also re-used in the next phase.

There are also other advantages in the choice of a polycondensation before the extrusion.

Let's start with the installation costs, which are lower for at least two reasons:

Consequently, the whole process is simplified and also the operating costs are lower than the version with polycondensation on the granule.

We can therefore say that in doing so the system has been optimized from many points of view (F5 - MODEL MOBY):

But is it possible to do more?

PET is a hygroscopic material and requires a dehumidification treatment (F6) before being transformed, in order to avoid hydrolysis effect with consequent aesthetic and/or mechanical defects in the final product.

Once the recycled has been improved in terms of IV and converted into granules, the granules must be dehumidified before the extrusion, and therefore other plants and other energy are needed again.

It follows that, where possible and/or convenient, the best plant optimization (F7 - MODEL MOBY +) consists in also skipping the pelletizing phase to go directly from the regrind to the final product.

As in the previous example, eliminating the pelletizing phase allows a further step forward in the reduction of investment costs, energy costs, maintenance costs and operating costs.

Summarizing the above, the maximum efficiency in terms of energy and investment costs, as well as operations and maintenance, is obtained with a polycondensation process performed directly on the PET regrind which is followed by a transformation into a final product without intermediate steps that, where possible and/or convenient, also avoid pelletizing (F8).

Among these limitations, the most important are the following:

In recent years, the PET recycling market has grown exponentially and, from a practical point of view, the situation has become more and more "complicated".

On the one hand, the offer of "first choice" recycled materials is not enough and, in any case, prices have risen to the point where it's sometimes anti-economic to use recyclates.

On the other hand, those who buy recycled PET to make production, require quality input, especially in terms of intrinsic viscosity (IV).

It's no longer possible, therefore, to make a mixture of R-PET of various origins and simply transform the whole into pellets with an extrusion line, because the materials with IV too low and, above all, inconstant, no longer have a market.

But it's no longer even possible to use PET treatment systems that work only if all the raw material input conditions are always stable over time, because the transformation would no longer be cost-effective.

Demand is growing, supply is growing, the need for quality is growing and the problems to be solved are growing to give quality at the right price.

The MOBY system (F9), which uses the simultaneous combination of infrared radiations, vacuum and mixing, overcomes the limits of traditional solid state polycondensation technologies, allowing to operate directly on the PET regrinds, increasing and stabilizing the intrinsic viscosity up to over 1 dl/gr.

Just to make an example of the MOBY performance on R-PET, in this video it is shown how, starting from a regrind of "multicolor" PET bottles with an initial IV that varies between 0.65 and 0.72 dl/gr, it's possible to obtain a final viscosity of 1.010 dl/gr with a process time of about 3 and a half hours.

The invitation is to re-think both investments in new plants and those in existing plants keeping in mind not only the methodologies used to date, but also the new technological opportunities that allow us to face a market - that of recycling of PET - always more complex and changeable.

Today the recycling of PET can no longer be only an "easy way" to reduce production costs by leveraging the lower raw material cost, but it must become a vehicle to produce quality equal - if not superior - to that obtainable with virgin materials.

For more information to get a recycled PET product with stable and controllable characteristics in terms of intrinsic viscosity (IV), write to us.

Ultra Purge 5160 for PET Preform and Others